Toei’s animation masterpieces are crying Toei Animation (Katsuhiro Takagi, President of Toei Animation)---Stop harassing your employees.
[Dismissing an employee just because they don’t follow their intent] Mr. A was working as a contract employee at Toei Animation Co as episode director. Mr. A was removed from the production line after being yelled at for his direction from one of the animation supervisors.. Mr. A talked to his boss about this issue and his boss advised him that he should use animators in a deceitful manner and that employee workers need to work hard like bees. When Mr. A objected to this advice because he couldn't bear to cooperate with something that was unethical and did not want to cheat his coworkers, the company changed his employee contract. Directors giving instructions to staff is within reason, but Mr. A was removed from his job based on an arbitrary and unilateral evaluation made by the company.
[Discrimination and pressue against non-regular employees ] Currently, most employees at the Oizumi Studios are non-regular employees. Even if you are a director who has been with the studio for more than 30 years and producing many famous animations is either contracted or freelance. Non-regular employees are discriminated against in wage and equal treatment; they are forced into oppressive obedience by power relations and subjected to a poor working environment, overwork and unequal treatment. The company tries to keep these non-regular employees satisfied by playing on their self-esteem to cleverly divert their discontent, while the treatment of full-time employees is among the best in the industry.
[Banishment room] When Mr. A. refused to agree to change his contract to an assistant episode director, the company applied pressure to Mr. A which appeared to look as though the company wanted to fire him if he did not agree. The company used many people to try to convince Mr. A.to move to another position. Being pressured by the company, Mr. A. finally agreed to the transfer and his new job was playing, rewinding, and packing tapes into cardboard boxes in a separate building away from the main studio in a small room with a tiny window.
[Harassment intensified after contacting Toei Group Hotline] Mr. A reached out to Toei Group Hotline, which was outsourced to an outside party, but it was handled by Toei’s Audit Department. The head of the audit department and the head of human resources who decided to transfer Mr. A used to work together as a subordinate and boss in the past. When Mr. A brought in a third party to discuss the matter, the company sent out an email to several of his superiors directing them not to use Mr. A.
[Toei Animation insincere cooperation for a collective bargaining] Mr. A joined Precariat Union, a labor union that welcomes anyone who is interested to join. Mr. A applied for collective bargaining to have his position reinstated and to disclose all work rules, wage policies, and other regulations as well as to improve his working environment. In response to this Toei did not answer questions that would put them on a spot and only shared very limited information from thier employee rules and regulations. Mr. A was removed from his episode director position and has been working for more than two years while being subjected to harassment in a workplace where an unfair consensus is the norm.
Insincere negotiating with a labor union is an illegal act in violation of the Labor Union Act. The Tokyo Labor Relations Commission is currently investigating this illegal act.
If you have any comments on this case, please contact: Mr. Katsuhiro Takagi President of Toei Animation Co. Nakano Central Park East 5F, 4-10-1 Nakano, Nakano-ku, Tokyo 164-0001, Japan Tel: 03-5318-0678
Free labor consultation is available to anyone who wants to join a trade union Precariat Union Palais Uru 5F, 4-28-14 Yotsuya, Shinjuku-ku, Tokyo 160-0004, Japan Union Undo Center TEL03-6273-0699 FAX03-4335-0971 Website https://www.precariat-union.or.jp/ Blog https://precariatunion.hateblo.jp/
Email info@precariat-union.or.jp 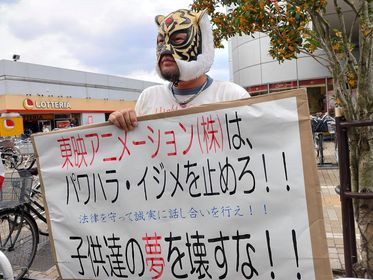